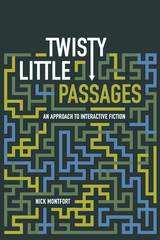 According to Montfort, the first work of interactive fiction, Adventure, was inspired as much by its author's Dungeons & Dragons campaign as his caving and spelunking activities; and indeed the book contains a lot of material that I think anyone interested in the history of RPGs in general and fantasy adventure gaming in particular would find fascinating. Chapter three even contains a sort of sub-chapter exclusively devoted to Dungeons & Dragons, complete with quotes from Gary Gygax and Dragon magazine. I'm not going to lie: this book is definitely not for everyone; it's a rather dry, academic exploration of a relatively obscure subject. But for the right reader (me), this is gold.
Posted by bevisiscariot at 5:18 PM