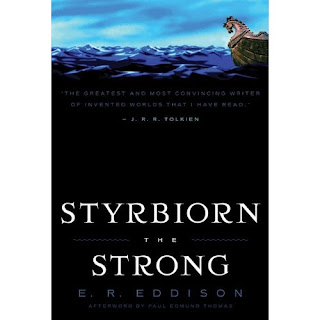 By far my favorite fantasy novel of all time is The Worm Ouroboros, by E.R. Eddison. (If you haven't read it yet, I suggest you quit whatever you're doing and remedy that stat. I recommend the 1991 Dell trade paperback if you can find it, because it contains a great many useful explanatory notes, even though the cover is to my mind horrific). So of course I was elated to discover that the University of Minnesota Press has recently reissued Styrbiorn the Strong, one of Eddison's earlier novels (written after the Worm but before the Zimiamvian Trilogy), which for many years now has been out of print and extremely difficult to get hold of in any kind of decent, affordable print edition. As an added bonus, this new edition includes for the first time the author's original letter of introduction and closing notes. Do yourself a favor and check it out; you shan't be disappointed.
Posted by bevisiscariot at 2:07 PM 4 comments:

" In 1974, the world changed forever when Gary Gygax introduced the Dungeons & Dragons role-playing game. The legacy of his innovative ideas and the extensive reach of his powerful influence can be seen in virtually every facet of gaming today.


To help honor his work and his memory, we created limited-edition reprints of the original 1st Edition core rulebooks: theMonster Manual, Player's Handbook, and Dungeon Master's Guide. These premium versions of the original AD&D rulebooks have been lovingly reprinted with the original art and content, but feature an attractive new cover design commemorating this re-release. Available in limited quantities as a hobby channel exclusive in North America.

Your purchase of this monumental book helps support the Gygax Memorial Fund—established to immortalize the “Father of Roleplaying Games” with a memorial statue in Lake Geneva, WI"
The rational person in me thinks, Who cares? I already have the originals. The collector in me thinks:

Posted by bevisiscariot at 10:36 PM No comments:

1. If you had to pick a single invention in a game you were most proud of what would it be?

My Labyrinth Lord adventure.
2. When was the last time you GMed?
It's been a few months.
3. When was the last time you played?
Six months, maybe more.
4. Give us a one-sentence pitch for an adventure you haven't run but would like to.
I'd like to run an adventure or a campaign that makes use of the whacked out Ghostbusters mythology.  "Many Shubs and Zuuls knew what it was to be roasted in the depths of the Sloar that day I can tell you!"
5. What do you do while you wait for players to do things?
I love to listen to their crazy ideas about what's going on and see if any of it is good enough to actually integrate into the game.  And drink beer.
6. What, if anything, do you eat while you play?
Pizza, usually.
7. Do you find GMing physically exhausting?
Sometimes.
8. What was the last interesting (to you, anyway) thing you remember a PC you were running doing?
Getting mauled by panthers.
9. Do your players take your serious setting and make it unserious? Vice versa? Neither?
The former. Though, to their credit, I'm much less "serious" than I used to be, due to their influence, which I think is a good thing.
10. What do you do with goblins?
Not enough. I'd like them to be darker and more otherworldly, like Blix from Legend.
11. What was the last non-RPG thing you saw that you converted into game material (background, setting, trap, etc.)?
Young Frankenstein.
12. What's the funniest table moment you can remember right now?
Half the party getting mauled by panthers.
13. What was the last game book you looked at--aside from things you referenced in a game--why were you looking at it?
OSRIC. Someone in a forum said the chapter on how to play the game was inspiring. I didn't find that to be the case but I really do think it represents a beautiful streamlining of AD&D so I kept reading it anyway.
14. Who's your idea of the perfect RPG illustrator?
Erol Otus when I'm feeling old school; Elmore when I'm in a more serious mood.
15. Does your game ever make your players genuinely afraid?
I doubt it. I think I came close once.
16. What was the best time you ever had running an adventure you didn't write? (If ever)
Tie between running the original Ravenloft module and the Desert of Desolation supermodule.
17. What would be the ideal physical set up to run a game in?
I'd love to run a game in an old castle.
18. If you had to think of the two most disparate games or game products that you like what would they be?
Chess and D&D. Controlled and competitive on the one hand, spontaneous and cooperative on the other.
19. If you had to think of the most disparate influences overall on your game, what would they be?
Jack Vance and the Dragonlance Chronicles.
20. As a GM, what kind of player do you want at your table?
Whatever the opposite of a rules-lawyer is.
21. What's a real life experience you've translated into game terms?
Falling, climbing, being in total darkness, etc.
22. Is there an RPG product that you wish existed but doesn't?
The original Castle Greyhawk.
23. Is there anyone you know who you talk about RPGs with who doesn't play? How do those conversations go?
Usually, when I talk to people who don't play, the conversations go something like this:
Non Player Character: "Wanna hang Saturday?"
Me: "Sorry, we play D&D on Saturdays."
"You mean you dress up in black robes and chant to Satan and wave ceremonial daggers around?"
"Funny. No. Did you ever read those Choose Your Own Adventure books?"
"Yeah, those were awesome."
"It's kinda like that, but with an infinite number of options instead of two."
"I don't know, man, sounds pretty stupid and crazy and childlike and nerdy to me. Anyway, I'll see you later; I'm gonna go play WoW or Skyrim or something."

Unless it looks a helluva lot like one of the versions of the game that the guys who invented the game wrote -- that is, unless they put back most of what they took out and take out most of what they put in -- they can keep it. I no longer need WotC, Hasbro, or "official" D&D. I hate to be a cynic, but short of releasing 2 versions of the game -- a classic version that looks like OD&D or AD&D, and a new version that looks like 3.5 or 4E -- I just don't see how they can satisfy both old-schoolers and new-schoolers. That said, if it DOES look a helluva lot like OD&D, B/X or AD&D; or they DO release a classic version of the game -- then they just might start getting some of my cash again.

Also, while I'm at it and in case there's some minuscule chance that anyone in charge will ever read this, bring Dragon and Dungeon back in dead tree format & keep your lousy subscription service. If I need a character builder, cards, chits, minis, tiles, grids, counters or ANYTHING LIKE THAT to play the game I will not be buying it. If I want to incorporate that stuff into my game, I will - but I shouldn't NEED it.

Oh yeah, and if I see anything about surges or surging anywhere, I walk. Surging is something people should do in private.
Posted by bevisiscariot at 4:01 PM No comments: